Hot take: anyone who tells you that Jekyll doesn’t support component-based design, and that you need a React- or Vue-based static site generator, is wrong.

Remember my “what you see is what you get” (“WYSIWYG”) componentized Squarespace-style “site builder” I learned Gatsby so I could build last year?

(Update: see this same “page builder” for 11ty on GitHub.)

Need to see with your own eyes that it can have a drag-and-drop CMS experience? Click around this theme in Stackbit and see. 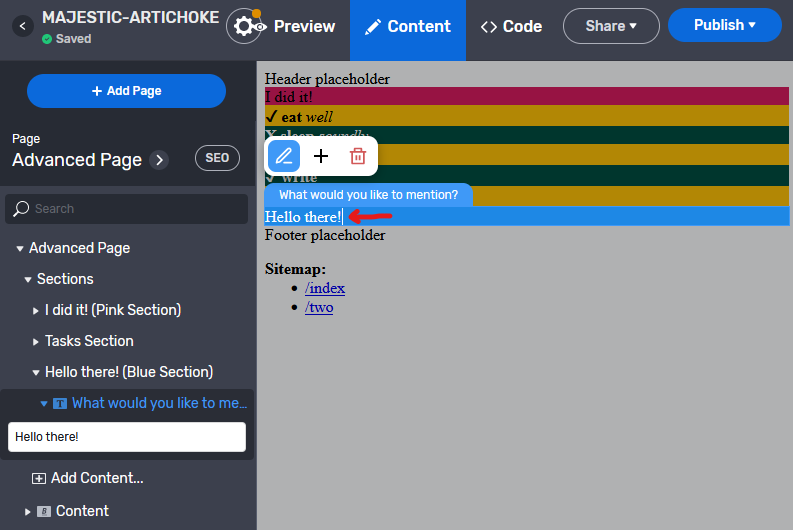 Okay, actually, no one’s wrong, per se, and certainly not lying, about newer SSGs (and their templating languages) helping you develop components easily.

I just wanted to point out that componentizing a site so that you can give content authors a Wix-like drag-and-drop experience comes from:

You don’t need a JavaScript-based SSG or a “hydrating” SSG or a “modern” SSG or anything of the sort to do really fancy things with “components.”

“Components” are a way of thinking, not a property of a specific SSG templating language.

The syntax can be heavy

Liquid doesn’t really love objects & arrays – particularly not making it easy to instantiate them as literals.

But also, the syntax can be light

That said, when you don’t have heavy computation to do, I find Liquid’s plain-HTML-like syntax much cleaner and more concise than React’s or Vue’s templating syntaxes, which is why I’m defending Jekyll in the first place.

Here’s what a basic component looks like in React:

Here’s what that same component looks like in Liquid:

The Jekyll ecosystem is small

It’s not JavaScript all the way down

When you’re using Jekyll, any custom computation you need that exceeds the power of Shopify’s Liquid templating language has to be defined in the Ruby programming language.

I’ll admit, it’s really nice to use one programming language – JavaScript – in:

Let’s be honest, these days all the cool stuff – particularly for supporting web site generation – is an NPM package, not a Ruby Gem. Like libraries that:

Jekyll is old, and it doesn’t bake in a presumption that you’ll be fetching external API-based headless CMS data into your build the way Eleventy does.

To use data from Sanity, Contentful, the Notion API, the Wordpress API, etc. you literally have to run (and possibly hand-write) code that dumps API-sourced data into files on your filesystem that Jekyll can understand, before running jekyll build. (A couple of pre-written libraries: Contentful’s gem, Sourcebit.)

You can 100% build a really well-componentized theme in Liquid, as I’ve shown above. But the whole point of building a componentized theme is to give people a Wix-like experience through a drag-and-drop GUI editor, and most of the good content management user interfaces are built into API-based headless CMS websites.

There are drag-and-drop content editors that play nicely with storing your content in the same Git repository as the site’s template codebase, like Netlify CMS and Forestry.io, but they’re not truly WYSIWYG experiences.

Sean and I got into a great conversation about specific use cases for making the jump from pure server components to client/hybrid components, and for him, one of the biggest reasons was having a website complexity scope that tipped the scales from “Liquid is awesome!” to “Liquid is so burdensome.” (See “the syntax can be heavy” / “the syntax can be light.”) Even when you don’t actually need any client-ish-ness to your components at all, there simply aren’t pure server SSGs with JavaScript as an underlying programming language that use powerful JavaScript frameworks and don’t “hydrate” your server components into client components. Often times, Sean finds that an enterprise project has to jump from 11ty to Next just to use more JavaScript under the hood – everything else that Next does with hydration is just a side effect, from the developer’s perspective.

Sean also pointed out that while authoring a main.js bundle isn’t so bad if all you’re trying to do is make one top-navbar pop out properly like I did for My Huong Kitchen, once you have dozens of interactive components rather than one or two, not using an SSG that’s built for tightly coupling markup and interactivity, and using vanilla JavaScript instead of using an SSG whose front-end framework gives you handy interactivity shorthands, becomes death by a thousand papercuts.