A friend is trying to come up with a clever way to use Excel to figure out in what month a given mortgage’s principal would have dropped below 80% of the purchase price of the home (at which point they would know longer pay a supplemental fee known as private morgtage insurance, a.k.a. PMI). I didn’t think Excel could do it, but it can.

I’m still not sure it can be done in “pure Excel,” but after reading this StackExchange answer, I learned that you can use the programming language built into Excel, VBA, to code your own “functions” that can be used in Excel cells.

It’s pretty slick. Let’s see how to build them and how to use them in spreadsheets.

I saved mine at C:\\example\\Mortgage.xlsm. 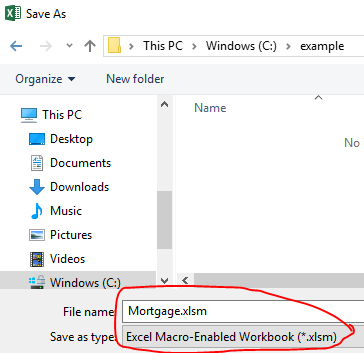 Next, if I don’t already have a “Developer” tab on my “ribbon,” I’ll need to customize the ribbon to add it.

Right-click in the whitespace at the far right edge of the ribbon and click “Customize the Ribbon.”

Then check the box next to “Developer” at right if it’s not checked. 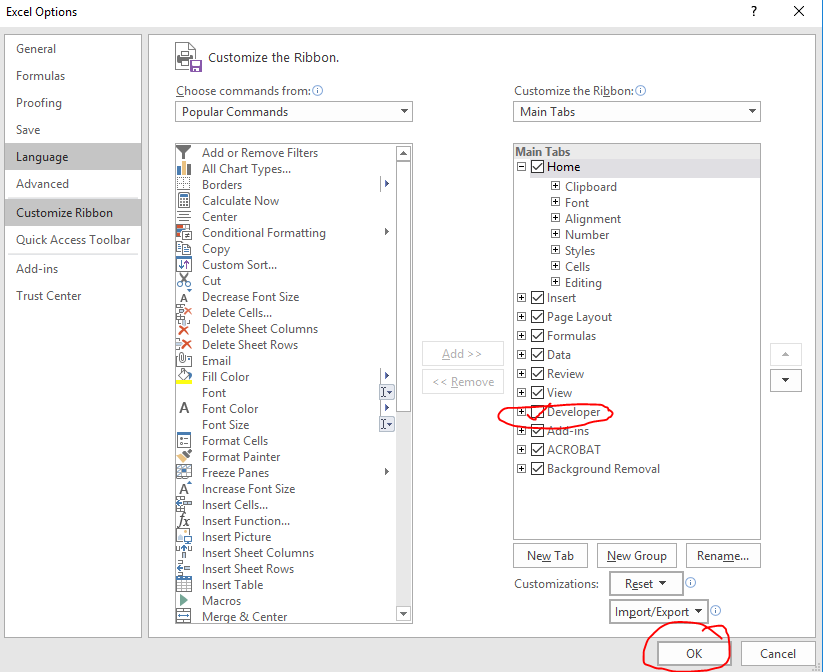 Now click on the “Developer” tab of the ribbon.

Click the “Visual Basic” button at the far left side of the ribbon. 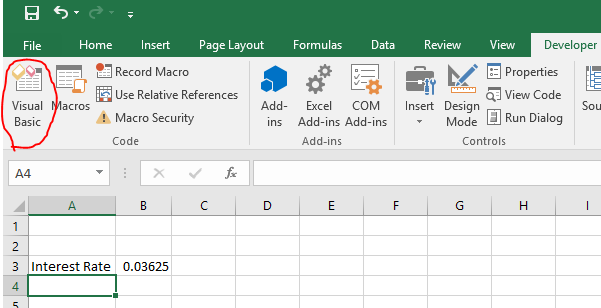 A new window will pop up. It might look a bit intimidating and programmer-oriented, but this will be easy – I promise.

Click on “ThisWorkbook” to select it. It’s under “Microsoft Excel Objects” in the “Project - VBAProject” box in the upper left corner of the screen.

Then right-click in the whitespace below it, still in the “Project - VBAProject” box, and click Insert, followed by Module 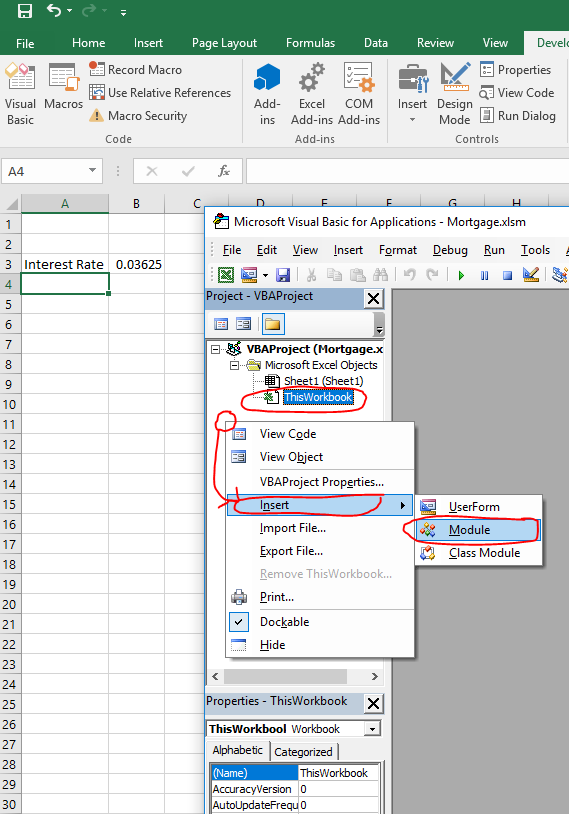 Paste the following code (written in the “VBA” language) into the empty text editor that pops up at right and click the “Save” icon in the upper left part of your screen:

What we’ve just done is add a new “formula” to the list of available formulas that Excel will let us type into a spreadsheet.

We’ve called our formula GetFinalPMIMonth, because eventually, that’s what we’re going to compute with it.

For now, we’ve written the code to insist that anyone who tries to use =GetFinalPMIMonth(...) puts a number (that’s what Double means) into the parentheses. Or a cell reference pointing to a cell that contains a number, anyway.

The last line of the body of our formula definition (which, right now, is the only line), is a bit special.

So far, we’re just going to multiply the interest rate by 100 as a proof of concept to demonstrate that we can actually make a custom formula and use it in our spreadsheets.

Use the demo function

Go back to the window containing your spreadsheet itself and, in cell B4, type =GetFinalPMIMonth(B3) and hit “enter.”

You’ll see that as soon as you get as far as =Get, Excel is suggesting our function. Neat! 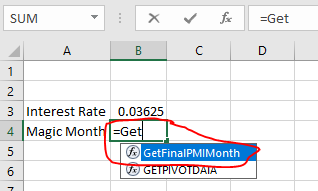 Congratulations – you just wrote your own function for Excel! Great power awaits you.

Now we have to make our function a bit more complex.

But before we do, let’s put realistic data into our spreadsheet. We’ll fill it out cells A3 through B8 as follows and save our file: 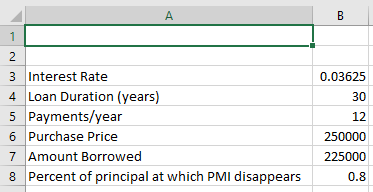 (There’s no particular reason I start at A3, besides paranoia that I might later need room for “more stuff” at the top. Start at A1 if you’d like; just adjust your formulas accordingly later on.)

Now we’ll go back to our window with the code editor.

If you accidentally closed it, just click the Developer tab on the ribbon, click Visual Basic, and in the “Modules” folder of the “Project - VBAProject” panel at the top left, double-click “Module1.”

Replace the whole block of code with this, and click the “Save” button in the code-editing window: 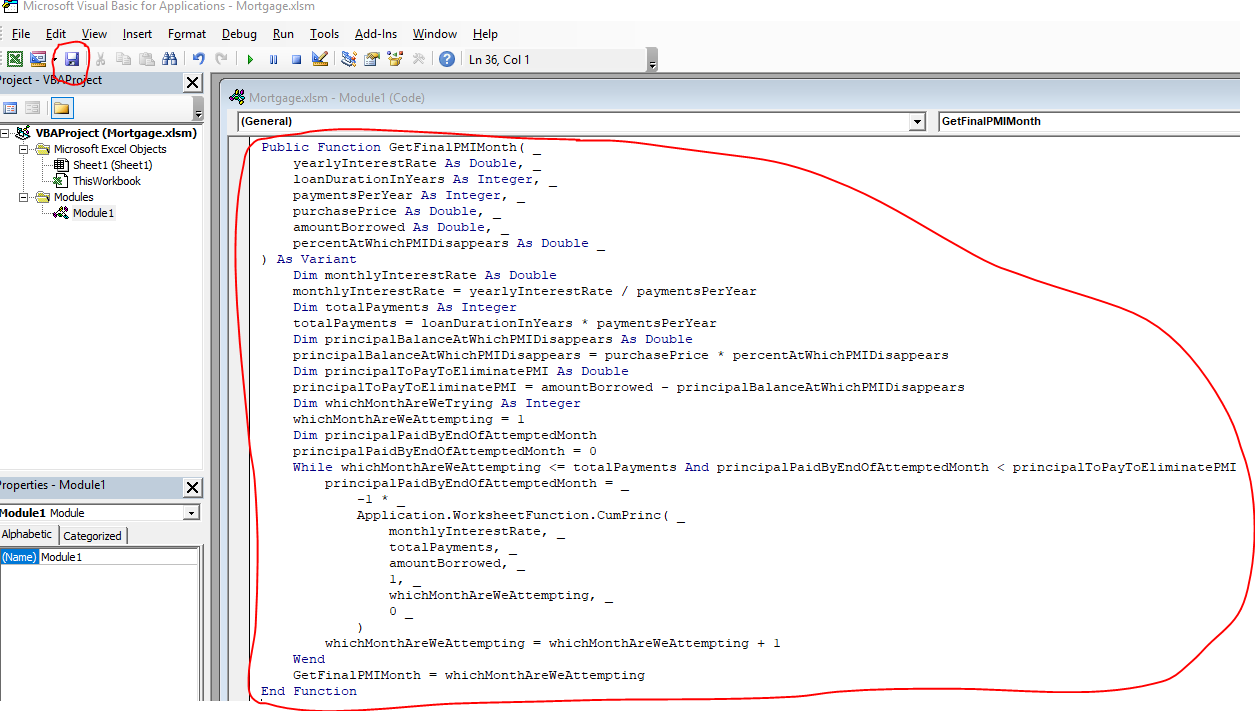 As you can see, our outermost structure still starts with Public function GetFinalPMIMonth( and ends with EndFunction.

I’ll explain the code later in this post – you don’t have to understand it if you’d just like to copy and paste it.

Use the real function

The value of cell B9 works out to 67 months, or about 5 and a half years, just like in my previous example!

Does it work? Hooray!

With B3 set back to 0.03625, our final spreadsheet output looks like this now:

See how much money you would save if you continued to pay your former PMI bill alongside your monthly payment as “extra principal.”

Explanation of the code

As promised, for people who like to truly understand what they’re doing, here’s how the VBA I gave you to copy and paste works.

You might note that there are a lot of mysterious places where I ended a line with a single space and an underscore: “ _”

The reason for this is that VBA is a line-break-dependent language. You put one command on each line.

If you are typing a command that is so long you’d have to scroll left and right to read it, you can clarify that adjacent lines should be treated as if they were part of the same line by ending a line with a single space and an underscore.

That’s all that’s going on there.

Note that the number of “input parameters” we’ve written our code to insist users enter got longer. Instead of just 1 called interestRate, we now have 6:

The meat of our code is in the middle, between As Variant and GetFinalPMIMonth = whichMonthAreWeAttempting.

First, store fixed values into 4 nicknames, or “variable names,” that will be handy in our calculations:

Loop until you get an answer

Next, we set up two more nicknames, or “variable names,” which we will use as scratch-pads, constantly changing their values as we check to see “if we’re there yet”:

I mentioned in my previous post on the subject that mathematically, we’re dealing with a bit of a “calculus problem” – one that involves computing an unknown number based off of known numbers even though “things are changing”.

After all, if you’ve ever looked at an amortization table for a mortgage, you’ve seen that the principal paid is different from one month to the next.

As I recently heard on the radio:

Normally, it’d take a bit more math to calculate the second answer than the first.

But we have an advantage – we don’t pay mortgages in a continuous flow the way a car accelerates. We pay them in monthly lump-sums.

That means we can cheat and avoid a lot of math.

(Life pro tip: Do not actually “floor” a car from 0mph to 60mph with your kid in the back seat.)

They’d be able to determine that it was “after two-one-thousand” and “before three-one-thousand,” that they saw the big red sign.

That’s what we’re doing to do with our code here.

When we get there, we’ll check which number we just punched into the second-to-last parameter of CUMPRINC.

If you’re following along in the code, we’ve been keeping track of this number under the variable name whichMonthAreWeAttempting.

The value of whichMonthAreWeAttempting when we exit our loop (bounded by While and Wend) is our “magic month” – the final month in which we’ll owe the bank private mortgage insurance on top of our ordinary mortgage payments.

That’s what we want as output for the function, so the final line of the custom function is GetFinalPMIMonth = whichMonthAreWeAttempting.