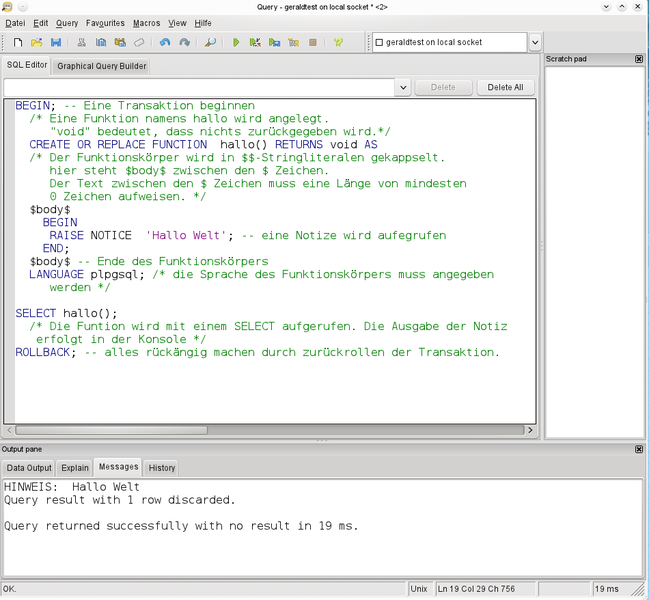 Why do these languages exist?

SQL is a “declarative” programming language that comes with most major databases that allows you to:

In other words, as rich and complicated and powerful as it is, in the grand scheme of programming, there’s a lot it can’t do.

When you want to write complex conditional logic or specialized loops over the rows in a data set, you may exceed SQL’s limits.

In most databases, they’re also what database “triggers” are written in.

Do I need know PL/SQL?

It depends what you’re going to do.

Most database administrators won’t let ordinary end users like you save your PL/SQL programs into the database as “triggers,” “functions,” or “stored procedures.”

Some database administrators will:

But for the most part, you may not be allowed to help your company write “triggers”, “functions”, or “stored procedures”. You may be limited to writing “anonymous blocks”. Let’s take a look at each of these.

Triggers are code, saved within the database, that the database has been told to execute every single time someone attempts to insert, update, or delete a record meeting certain criteria (e.g. stored in a certain table).

Functions are code, saved within the database, that become extensions to the SQL language (for users with permission to execute the functions).

For example, in Oracle, NVL(SomeColumn,SomeValue) is a function that comes pre-installed as part of Oracle’s version of SQL and means, “If the value in SomeColumn is blank, substitute SomeValue instead.”

Storing “functions” within the database lets you add your own CleverName(...) operations for end users to use in their SQL scripts.

For example, the university where I work has saved 3 functions into the database called:

These turn “today’s date” (as computed by the database computer’s clock) into useful information that makes more concise to write queries such as:

Let’s say one of a company’s web developers is writing a self-service portal for customers that retrieves data from your database and displays it on the screen to those customers.

There will be at least one SQL query to your database, because at the very least, you have to tell the database whose data the web site needs to display.

So your web developer might write a SQL query saying:

Where did [email protected] come from?

From some stranger on the internet claiming that that’s their email address?

What if they lie and put more SQL code – code that deletes all tables in your database – into the “what’s your email address?” box?

Such attacks are called “SQL injection” and are very dangerous (see “Bobby Tables” for more information about preventing SQL injection.)

From a database administrator’s perspective, it’s considered best practice to prevent the username under which “public”-facing code like the customer self-service portal runs from directly executing any SQL queries against the database.

Instead, database programmers for the company will save “stored procedures” into the database and give “web” code permission only to call those procedures. Such procedures serve as an API that the web programmer can safely call. For example, there could be a stored procedure called:
fetch_cust_by_em(email_address_here)

It’s then those procedures, saved inside the database, that are responsible for making sure that email_address_here is a real email address, and safely refusing to fulfill the request if not.

The web programmer no longer has to lose as much sleep about “sanitizing” their “inputs.”

If you aspire to become one of the people who writes “triggers,” “functions,” or “stored procedures” for your company, you must learn a “procedural” database programming language like Oracle PL/SQL, Microsoft SQL Server T-SQL, or PostgreSQL PL/pgSQL.

They’re all somewhat similar, so feel free to choose whichever one makes the most sense to you.

If you’re allowed to execute SQL against your database, you can write and run fragments of “procedural” code called “anonymous blocks.”

(Presuming your code doesn’t do anything to the database that you, typing SQL by hand, wouldn’t be allowed to do.)

As an end user, I can usually do everything I need to with SQL. But once or twice, I have found myself needing to do things that were a little bit “fancier” where a “PL/SQL anonymous block” provided me an extra boost in computing power.

If you’re already using the data you’re fetching with SQL inside of another programming language, such as Java or Python, you might find that the language of your “main program” is more than sufficient to do that “little bit of extra processing.”

My advice: pick the approach that works best for your business needs (including security).

How to learn PL/SQL

Sorry I’m not familar with any great beginner’s tutorials for T-SQL or other competitors to PL/SQL. Let me know if you have any!