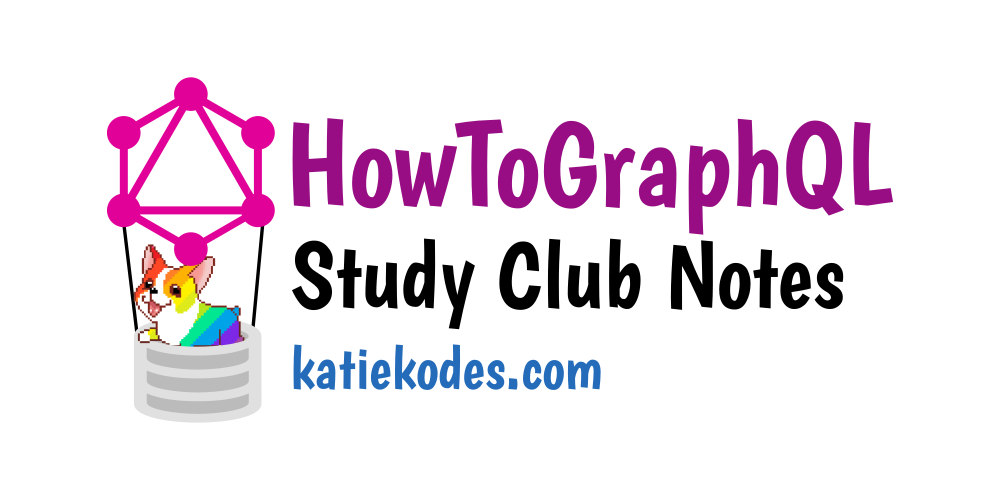 I stumbled into the Party Corgi Discord, a community of front-end web developers who produce a lot of written, audio, and video content teaching and learning the tech they use.

I happened to be online when the opportunity arose to study HowToGraphQL.com as a group, which is great because at work my team just got access to a new product that uses GraphQL (an HTTP-based communications specification), and I had no idea in the slightest how to use it until I started playing with Gatsby a month ago. I thought it’d be fun to follow others’ lead and take notes in public.

It’s all about the joins

Using REST-based API endpoints with interconnected data can often feel like the exercise in the for-loop-based “manual joining” my Big Data professor taught us on a whiteboard when we were all mystified how to leave the world of SQL behind.

GraphQL was, among other concerns, developed to make writing HTTP requests for data a little more like writing SQL or Salesforce’s “SOQL.” All a coder worries about, even when wanting to “join” data, is writing a declarative query.

Apparently a lot of coders writing GraphQL don’t bother to write the HTTP requests over which GraphQL-syntax code is sent, any more than SQL programmers bother to hand-write ODBC connection details into their codebases.

Such concerns are usually delegated to frameworks within the language in which software using a GraphQL-based API is being written.

In contrast, it’s apparently much more common for coders to hand-write their HTTP request details when making calls to REST-based APIs.

Comparisons to other query languages

At first I wondered if I could make a post like “Every SQL Join You’ll Ever Need” about GraphQL, but upon realizing how much it depends upon “joins” predefined “on the backend,” I realized that a more appropriate inspiration would be the classic Salesforce article “SOQL – How I Query With Thee, Let Me Count the Ways”.

Like SOQL, it appears you can’t just arbitrarily cross-join “relations” to your heart’s desire the way you can in SQL. Instead, foreign-key / primary-key (parent-child) relationships are pre-defined as part of the “allowed queries.”

I doodled the following notes on paper:

But then I realized … maybe not so much.

allParentObjects is supposed to correspond to FROM ParentObject__c but has its own dedicated name made up on the fly by this particular GraphQL API’s authors (despite having a data type of “list of ParentObject-s” or [ParentObject]! in this API’s schema – which, by the way, is written in “SDL”).

On the other hand, when you do a Salesforce subquery, the FROM inside the parentheses gets a special name (in the case of custom objects, defined by you – e.g. Children__r for the Child__c object) that’s different than the “table” name, so … having “different names for different parts of a query” isn’t completely foreign to SOQL-type concepts.

That said, it’s different enough that I think I need to abandon all hope of making comparisons between GraphQL and other declarative query / data-modification languages.

Okay – one more “comparison.” Unlike SOQL/Apex and more like SQL/DML, GraphQL has a “data modification” syntax that looks a lot like its “query” syntax.

(GraphQL also has a similar-looking syntax for “subscriptions,” which looks interesting to learn more about.)

Posts in this series